View in view or peek views

bracket and visual studio have this handy feature wehre you can open a small, temporary view inside another view to look at another file. Something like this: 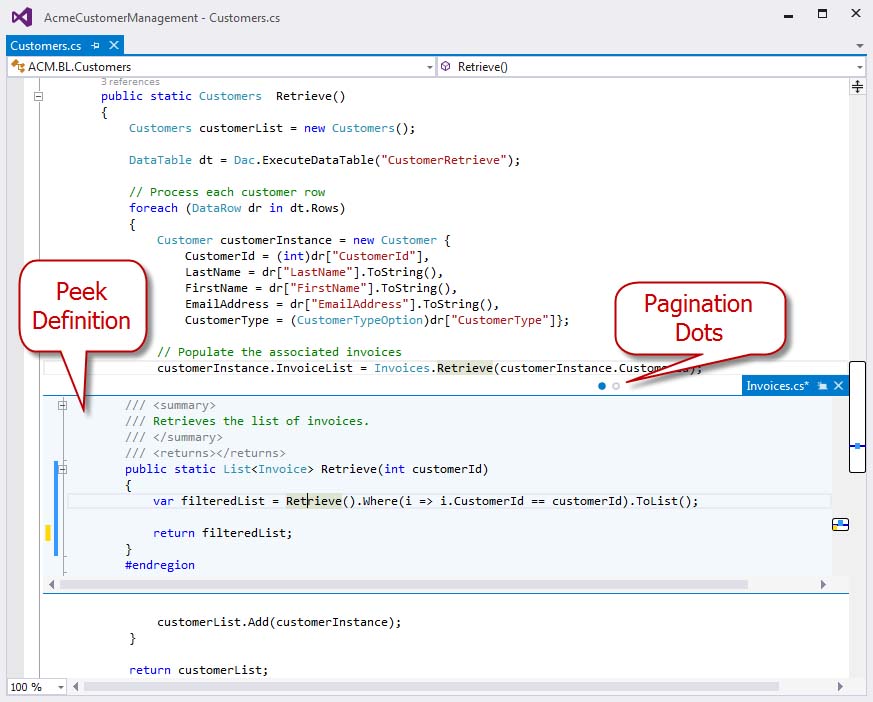 This sort of API I feel would provide a good foundation for package control to display a message that updates are available for packages, but it would not automatically download the updates. This could also be used to notify the user that some process has finished. There are plugins out there that will use the systems notification system, but I feel that a system within Sublime that follows the look and feel of the UI would be a better implementation.

I may have missed something with my limited testing of this functionality, but I think being able to inject a new set of data into an open autocomplete list might be helpful.

API to for changelog window with mini html support

The possibilities of full-fledged HTML Views, of course, are endless and some Atom’s packages show that. Might be substantial though. A much easier implementation would be the an API with the changelog window (Sublime Text -> Changelog…) with support for the same mini html from show_popup, markdown or something like that.

This is not a suggestion by itself but a reply to many posts as I read through them.

You should be able to do this curretnly by creating an output panel and not showing it. Output panels behave just like normal views, except that they have a few settings overrides such as a disabled buffer.

Edit Preferences has a feature that lists all plugin-defined command names in a quick panel.

You can sort of do that already by tracking whether your quick panel is active and defining a key binding with a context that only triggers when this is the case. We do this for FileHistory to emulate Goto Anything’s right arrow key feature and allow deletion of entries with the delete key (only if the caret is at the end of input).

What you should do instead is:

Although this is a rather common use case of modfication events, I currently don’t see a nice API that’s not too specific for this use case and would seem like an arbitrary specification of something that would be 20 LoC. Maybe setting the timeout in a class variable could work though.

Yes, please! I work with InactivePanes, which absolutely has to modify the color scheme since it changes the colors of all scope selectors. But all the other plugins like SublimeLinter or ColorHighlighter (or GitGutter even, which needs it for the gutter icons) really only want to add specific RGB colors so that they can use them in add_regions and the conflicts are amazingly annoying.

That wouldn’t be an API though.

Some plugins only rarely have to show something in the gutter (SublimeLinter) and would rather have ST handle gutter conflicts by itself (maybe by automatically widening the gutter if the line is scrolled into view), while GitGutter would probably like to have its own dedicated column.

You do this by changing a the “folders” item in the window’s project data and setting it with window.set_project_data(), as you show in the sample code. The decision to use relative paths should be the plugin’s, as well as the follow_symlinks value.

Your main goal is to completely define a command’s key mapping from within a plugin, correct?
I would rather have the context queries exposed (as suggested by @kingkeith here) and then a single addition of is_context or is_active which replaces the behavior of a context object in a keymap. Keys should imo still be defined from keymaps since that makes them easier to override and is more consistent.

Now, onto some additions to other suggestions:

I would like to add to this the ability to add panels to views (not just the window with output panels). These panels should move and appear/disappear with the rest of the view and be stickable to any side. Ideally you could show multiple panels on each side or allow the user to rearrange them however they like (comparable to many other applications that have panels like Photoshop or Gimp), but that’s a UI not an API thing.

And, while we’re at it, there could also be window-specific panels (like that HTML view), except that they are always visible (unless closed) and not part of the view layout. That’s not a high priority though since you can emulate this with HTML views.

Not so much a fan of this. What we really need is a:

Specifically, I’d like to have the following features in a notification system:

Changing the icon this way would also be nice, I guess.
I’m not so sure how I feel about

A post was merged into an existing topic: API Suggestions

Some editors (eg Notepad++) have a configurable function list panel which my colleagues love, but I can’t match in ST: It gives an immediate clickable overview of all the lines in a file matching a regexp - e.g.
Match: ^\s(*FUNCTION|PROCEDURE) \s+[A-Z0-9_]+
Show: \2
This only shows functions in the current file. Maybe a multifile-tree-based varient based on sublime’s index files would be even better,

Support multiple icons per line in the gutter.

Gitgutter, linter, bookmarks, bracket matcher, etc. all fight for a place in the gutter and there can be only one. There is no solid logic for which one to show, so Sublime should support having multiple icons. Perhaps through multiple gutters, but that’s not very elegant (this is Atom’s solution and it’s an annoyance as far as the GUI goes). Instead, the gutter could simply grow to accommodate icons as required.

Currently, there is no hook for themes to indicate which editor is active / has focus. Visually they are identical.

I guess I envisioned this working independent of the pop_up API altogether. What happens when you are using a plugin that uses pop up’s and this notification is trying to display. Since you can only have one pop_up per view they would be battling to display. I guess I feel like these really serve two purposes. One is for contextual information related to what is in the view and the other is strictly for informational purposes related to an even or action that occurred.

I do like your innovation and thinking outside of the box. It is a really interested approach that you have come up with based on what we have available!

With my limited testing on_query_completions was not invokable directly. It could only be called when you pressed ctrl+space. Although, now that I think about it you could just invoke the command via run_command which might be something to look at.

Here are two I would absolutely love .

A post was split to a new topic: Question about Interface Suggestions

Scroll Bar Colors are too Dark to see

Please change the color of the scroll bars. They are extremely hard to see. Dark color on top of a dark color is pretty useless. I recommend you use the same colors that the underlining systems use. I am on a MAC and in Safari they are GREY over WHITE. I think that is the same on Windows.

Or at least has an option to indicate you want to use the systems color.

Still hoping for font ligatures, although “it won’t be soon”.

Possibility to open / search in http://devdocs.io/ inside editor ( like in Atom )
https://atom.io/packages/api-docs

Motivation: I want to easily read the text that dsiplays in front of the block cursor

Description of the problem:

Currently we can get a block cursor by setting inverse_caret_state to true.

I can style the cursor in tmTheme files with the selection and caret keys.

The problem is that even though the cursor uses selection to set the background colour, it completely ignores selectionForeground unless you actually click and drag over some text.

I would like selectionForeground to be toggled on the current character that is in front of the block cursor when it blinks on and off rather than using the syntax colour.

In the gif you can see that when the block cursor is resting on a character and blinking the character foreground colour stays the same.

I want the colour to change to black (in this example) when the cursor blinks on, and revert back to normal when it blinks off.

The normal selection styles are fine.

If this could be added Sublime would finally have a decent block cursor in my opinion.

My thread describing the full problem can be found here: inverse_caret_state foreground colour

I use Zeal and the Zeal package for this, which works perfectly fine. I do not think that we need an inline HTML panel for everything, especially if it already exists in external applications (compare “live HTML preview” packages that use chrome). Also, this needs to be done as a plugin anyway, which is why your suggestion is extremely unspecific and in fact the same as Interface Suggestions.