Sublime key-binding commands have a context object where you can limit your key binding to, for example, a particular scope. The context object is very flexible and powerful. Unforetunately, we don’t have this context object for defining a sublime-mouse-command.
Having this feature will allow us to make much better plugins to enrich the user experiece with some mouse interactions.
Right now, if you define a sublime-mouse-command, it’ll be global and you’ll probably disable some other mouse interaction which will piss off user and that’s why I removed all mouse interactions from my plugins despite numerous feature requests.

YAML based format for color-schemes

read more about it here

line_color or gutter_color could add a subtle color marker to the line like the example screenshot from Atom. This doesn’t replace @oivva suggestion. It extends it. With this addition there would be two things a plugin can modify in the gutter: a) add an icon (already possible and used by many plugin). @oivva suggestion would make it possible to add multiple icons. b) change the line color. The line color could be used to show git changes and the icon for linting or something else. Compared to multiple gutter icons, this does take away any space. 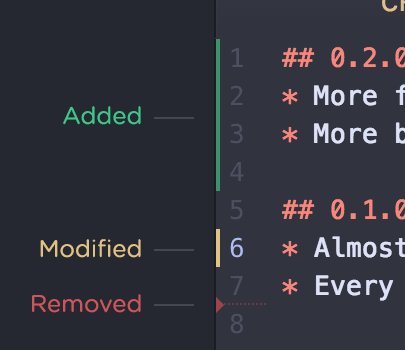 Sometimes you want to provide some contexual information that can not be part of the content of the view, something like the error message from the linter or showing an image or a chart in en external tool. Showing an icon beside the text that could trigger other api calls like showing a tooltip or opening another view would be really beneficial. something like this in intelliJ:

I haven’t worked with the tooltip API at all, but I’d love to see something like Atoms.

I know we have basic CSS, but full css styling along with a set of nice looking default CSS rules for tooltips and labels could go a long way.

I think you can get very close to something like this. You just need a linter plugin to take the time at put it in. The CSS is limited in the API, but it is sufficient for things like this.

Another API that I would like to see is the ability to force an update for the auto-complete list. Our code base is thousands if not hundreds of thousands of functions. I would like be able to serve up a subset of those functions once the user has entered more than 2 characters. I may have missed something with my limited testing of this functionality, but I think being able to inject a new set of data into an open autocomplete list might be helpful.

Find in Region by selectors

One thing I would really like to see would be the ability to do a view.find_in_region_by_selectors(region, [selector1, selector2]), which would essentially be an upgrade to the existing view.find_by_selector method, to include:

a. a region within which to restrict the results
b. an array of selectors

The result would of course be sorted by position, and could include the entire scope of the region, or just the selector that matched, like this:

Firstly, I know that having an array for multiple selectors may seem pointless, because a selector can include a comma to perform an “or”. i.e. string, comment.
But the problem with this, is that, if the text matching the selectors are adjacent, the region returned will include all of them, and most of the time, it is much more useful to have them separate.

will return the following:

Now, imagine that one wants to know the location of all the comments in the file and all the strings in the file, while preserving the order. With the current API, the “most efficient” workaround is to do this (view.substr is just for demonstration of what gets returned):

Now this is where the proposed region restriction comes in handy. Most of the time when I am developing plugins, I am only interested in a small subset of the file/view at a time, and I feel that being able to get results only for a particular region will make the plugin code easier to read/understand and write, while at the same time being more efficient. (Even if the same process would have to happen in the C code, it would be a lot quicker than processing it in Python I think.)

One possibility would be to alter the find_by_selector method, to include the new functionality, in such a way as not to affect existing plugins that rely on the current behavior:

Sets of APIs to Improve one aspect of the performance of ST:

All file events, give events for:

Any change on disk about a file/folder is created/changes/reloads/gets deleted, even if not opened. The current ugly hack is to recurse the folder till eternity.

Dispatch events for when a view is scrolled, so we can for example scroll other unfocused views in relation to the current focused view. The current ugly hack is to loop forever and see if the scroll changed

This gonna be hard to explain and Im sorry, We need “light” versions of on_selection_modified and on_modified .

Because these two apis are too verbose and everyone use it wrong, Then later people complain ST lags, when they triggering heavy tasks on every key press or cursor move. Some people even believe they use it right because they move to threads, and actually this is worse, there’s no need to dispatch 30 gonna-be-useless threads because you hold a key to type or to move the cursor for a few seconds.

I suggest something in the lines of ;