I just downloaded ST4 to check it out and right off I noticed that the menu bar was missing. It is showing as a “sandwich” menu on the left. How can I get the full menu back? 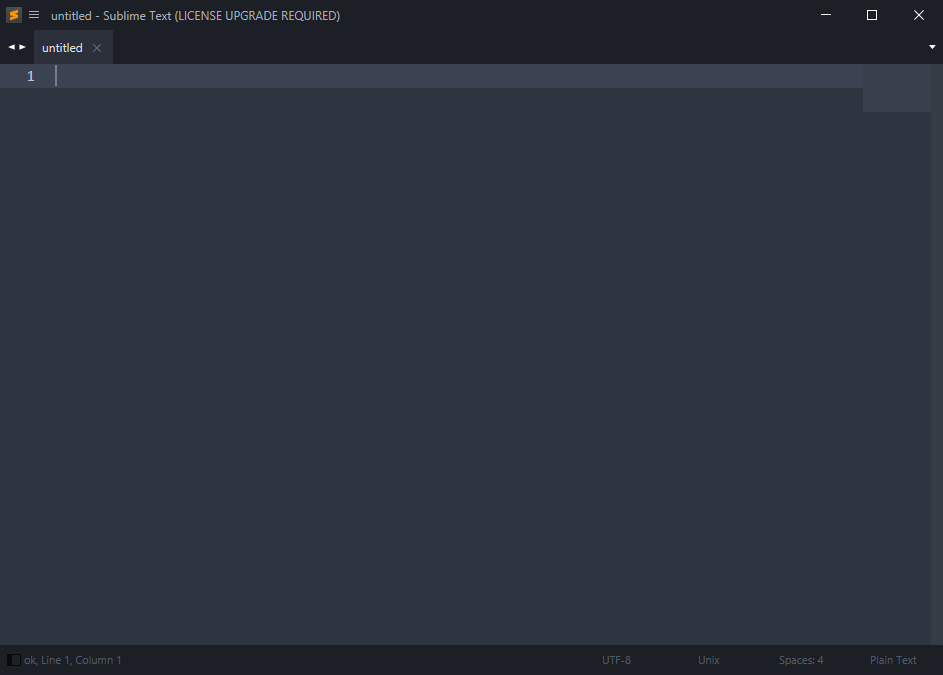 I looked but couldn’t find the “Toggle Menu” option (and using menu_visible entry in setting gives me a warning that it is an unknown setting).

This image shows the menu displayed: 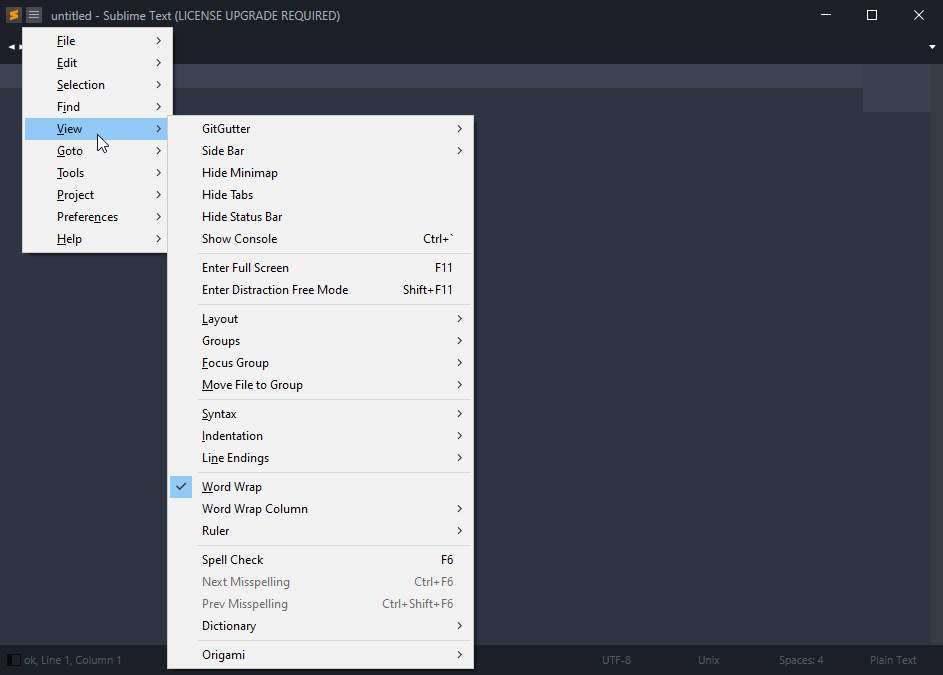 I looked but couldn’t find the “Toggle Menu” option (and using menu_visible entry in setting gives me a warning that it is an unknown setting).

Since, it’s the Adaptive theme, that option won’t be visible.

I’m using the Spacegrey theme. I’m guessing it is based on the Adaptive one. I tried the ArcDark theme and the menu is showing correctly: 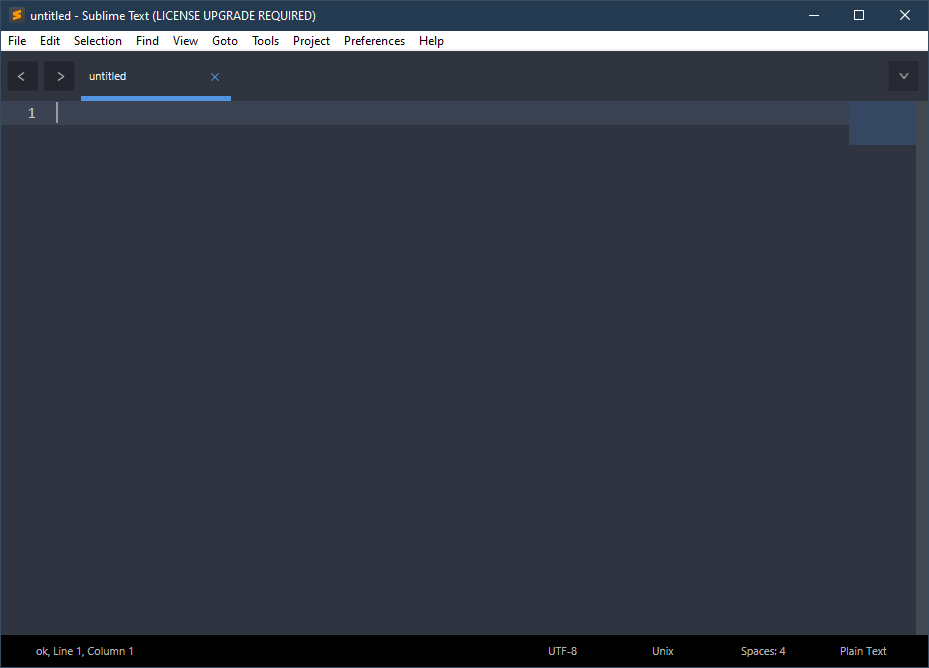 Thanks for your response @UltraInstinct05!

I wish this was an option though…

Thanks for your reply @bschaaf. I have tried adding “themed_title_bar”: false to my settings file but it does not work. The menu bar is still a hamburger bar.

It may only work for the built-in themes. Other than that you can customize the theme to not have a themed titlebar.

Any advice on how to that?:

I see the following regarding the title bar in the theme’s file:

On the customization side I see the following:

I don’t really have any experience with modifying themes.

UPDATE:
I have tried setting the theme’s customization to the following without any luck:

Alright, I now have come to the bottom of this.

The theme uses an arbitrary setting disable_custom_title_bar that serves the same purpose of the new themed_title_bar setting. Setting the disable_custom_title_bar to true disables the customization of the title bar and thus removes the hamburger menu and brings back the “old” menu that can be styled either as “light”, “dark” or “system”. As far as I know, the bg key has no effect in the non-styled title bar, so no luck in setting a nice color for it: 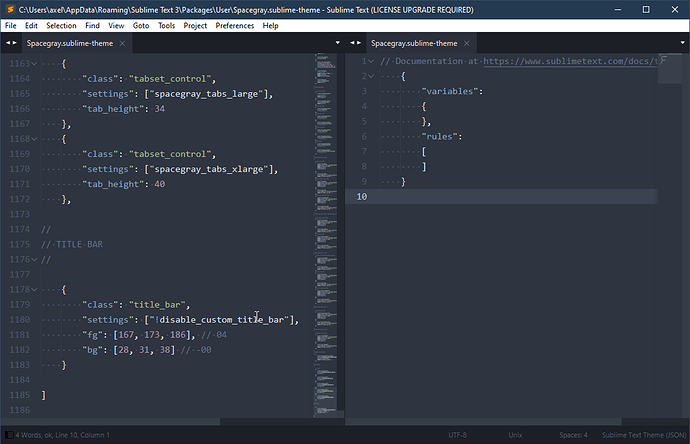 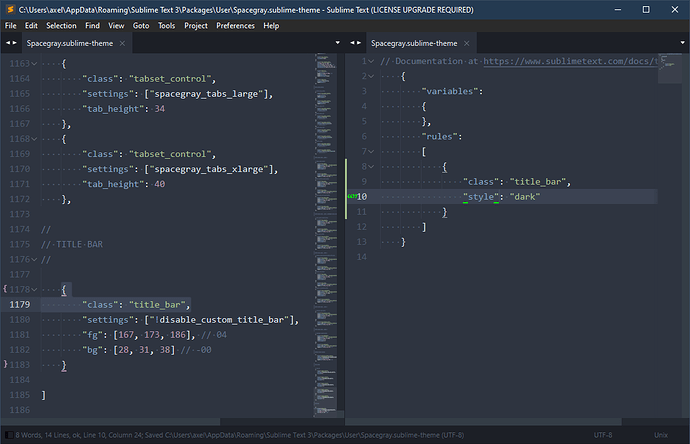 When using the title bar customization, at least for Windows displays the menu as a hamburger menu as stated by @bschaaf, sadly this seems to be the default and only display option for Windows: 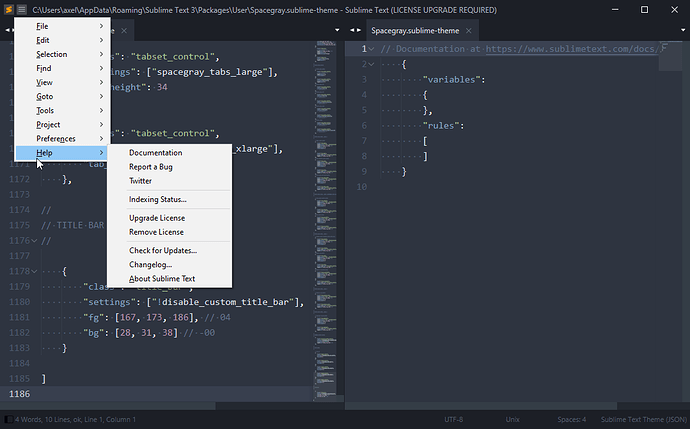 I wish we could have both: a themed title bar with the menu not being a hamburger menu… but as far as my testing goes, I think this cannot be done, so I’ll just stick with the hidden menu at the moment.

The reason why hamburger and themed titlebar are tight together is complexity of custom rendering needed to make main menu themable. Custom titlebars don’t make sense if the main menu still renders with default windows colors. It just looks off. Implementing custom rendering for menues on the other hand seems to be quite hacky as it needs to make use of badly documented or even undocumented Windows APIs up to some point, which may easily break with OS updates or cause all sorts of other issues. I can’t remember when I last used the main menu at all, since everything useful is or can be added to command palette.

I filed a bug report about the disappearing menu. For, even aside from the visual infelicities that this forum thread has ended up discussing, those on Windows who upgrade should be made aware that their menu will (or might?) disappear. They should be told too how to get it back. All that is needful is to make a - fairly prominent - change to the release announcement. Or, or additionally, a thread on this forum could be stickied. Or I suppose instead the developers can continue to field the same questions, over and over, here on the forum and on the bugtracker.

How do you do this?

I like the new ST4 theme, but I would like to optionally show the menu bar / title bar. I was not successful with trying different combinations for the theme settings.

In all the years of using ST, this is the first time I (a) got really confused (b) had to bring back the previous version and settings from backup © got so annoyingly distracted from work I had to come here and rant

No, seriously, devs, if I had known you took the main menu away without an obvious way to bring it back (such as View -> full menu) I would never have installed v4. Thankfully I keep all settings backed up, because v4 makes a bunch of config changes that break v3.

Before I even noticed the missing menu, my custom scheme became black on black, why should this ever happen? Then losing the main menu without a warning or explanation was really the last straw.

Why theme the main UI, anyway? It’s always bad design. The main UI is themed by the OS and tweaked by the user, but there is huge value in all windows having the same-looking controls and a consistent theme. (For one thing, lots of 3rd party utilities like macro apps depend on that.) Things like that should never be changed, and certainly not without asking! Of course, lots of software does it now, the pox started a long time ago with media players, I believe, and now even web browsers don’t have UIs consistent with the OS. But I would think that the kind of people who use Sublime Text (if one can speak of such a kind

) would appreciate more restraint there, and at least the courtesy of an upfront explanation or prompt.

I still love ST and don’t want to use anything else, but it seems like v4 is not for me. And thanks to self for diligent backups.

I understand your ranting @marekjedlinski, indeed ST4 changes some config values (I tried to open ST3 after it and it didn’t even load the app correctly). I have to say though that I didn’t read the ST4 release blog article beforehand, which does have an option about running ST3 and ST4 “separate”:

Also, it is easy to bring back the menu, the only thing needed is to add the key-value pair "themed_title_bar": false to your settings. This is somewhat documented, though it is not so clearly explained (nowhere is it said that the custom title bar forces the menu to be displayed as a hamburger menu in Windows) unless you spend some time digging in (also in my case, the issue was also in the theme I am using):

Please know that I am in no way trying to undermine your complaints and you have expressed fair points. I am just trying to establish that as much as some things are responsibility of the developers (and there are certainly ways to improve communication to their users), we as users also bear a responsibility to read and document ourselves about the changes and possible impacts when the hard work of documenting them has already done by the devs.

Kudos for the backup! It is a very good practice and as you have seen, it can save the day!

I’m using the Adaptive theme, was surprised by the ST4 menu change with no clear way to get it back, and "themed_title_bar": false was just what I needed.

Hi, I just updated to Sublime Text 4, and noticed my menu bar was acting very weirdly. First I saw there was no menu bar anymore (only that hamburger icon thing) and a new themed bar (image 1), then I noticed that I soon as I save a file or start editing, the new themed bar partly disappears (with the old Windows bar underneath), and I’m left with two bars on top of each other (image 2), and when I hover over the bar, then the hamburger icon and the close/open buttons re-appear… (image 3).

This is an absolute catastrophy… I’m on Windows 7 at my work (and can’t switch to Windows 10).

I tried adding "themed_title_bar": false to my settings with no luck, but I’m not sure it’s the right place. Or am I supposed to modify the Adaptive theme ? Anyway I just went back using the default theme (which seems to work correctly without the themed bar), otherwise this an interface nightmare…

Note there’s currently a bug where that setting won’t apply when using a light or grey color scheme. We’ve got a fix incoming, but until then you can try switching to the default theme.

@enogael glad you find a workaround for now. On another note: you should really update from Windows 7, you are living on the edge there…