In an attempt to get some up-to-date info, and ideally a centralized list with feedback from other users, I’m interested in hearing what package developers would like to see in terms of API enhancements.

I sincerely appreciate the time and effort that I’m sure many of you will put into this. I will be splitting off interface suggestions to a separate topic. I will also move discussion of ideas to linked topics.

So, what changes would you like to see made to the API?

14 posts were merged into an existing topic: Interface Suggestions

opens a read-only view in a new tab of path/to/file.ext of package package

Taking that back: This works as explained below by jps and fichtefoll.

Extension API for tooltip / popup - to get more advanced tooltip like in other editors ( example: https://github.com/ternjs/tern_for_sublime/issues/85 ) Hints in Atom (without any extension) The hint in Brackets / Atom display some usefull information like an type, parameters, returns, descriptions, url to documentation
I think that is one of the things, that most missing in ST, especially for beginner developers

To implement this I would envision allowing for returning a tuple from on_query_completions like so: (completions, flags, on_change), where the on_change callback would be called with the index of the completion in the corresponding completions list whenever an item in the overall completion list is highlighted that is from that set.

This might be really tricky to implement since there are potentially going to be many different sources/plugins providing completions via on_query_completions and the correct callback with the correct original index (since all the completions are aggregated into one list) would have to be called as the selection changes.

As far as rating this goes, I would say Minor since I would definitely use this, but the lack of it doesn’t prevent completion lists from being useful.

…As I was writing this I recalled this thread: Dev Build 3071. Based on that I guess the popup API is not supposed to be used as I just described, so alternately it would be nice to see the suggestion made there implemented:

With regards to COOPERATE_WITH_AUTO_COMPLETE, the intention is that the popup is displaying information relevant to text in the buffer, not to the selected item in the auto complete window. e.g.,

Auto complete would be showing completions for the current word, but the popup in this case could be displaying information about the parameters that foo accepts.

I’d like to provide a way for the AC popup to show extended information about the currently selected item, but it would work via a different mechanism than view.show_popup().

Having some control over windows that we create would be useful:

I think these wouldn’t likely return anything, but if they absolutely had to, I guess they could return a boolean indicating success or not. This is of minor importance, but it would make the user experience for my Side-by-Side Settings plugin a little nicer.

Add A “MenuText” Property To Snippets

Currently, snippets are displayed in the command palette either by their filename or, if provided, by their description property.

An issue with this is that the user has to choose between a description that is useful during auto-completion or one that is more suited to the command palette.

For example:  I have a set of Sublime Text API snippets.  I would like to be able to use description to provide information about the snippet - but a need that takes priority is the ability to easily filter groups of snippets via the command palette.  As such, my descriptions essentially mirrors the snippet’s contents with the addition of a contextual prefix.

This allows me to easily find a snippet via the command palette by typing Snippet: [Context], but it makes the auto-completion display cluttered & redundant: 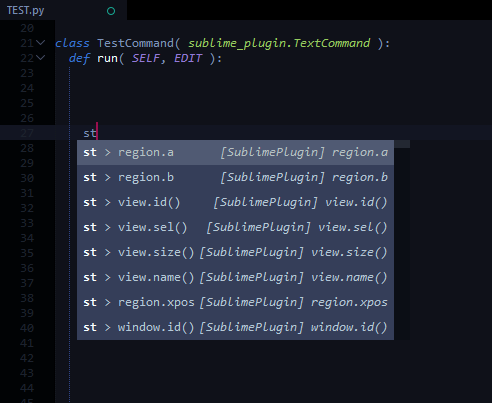 If I were to use description for it’s intended purpose, I would lose the ability to contextually filter through snippets via the command palette: 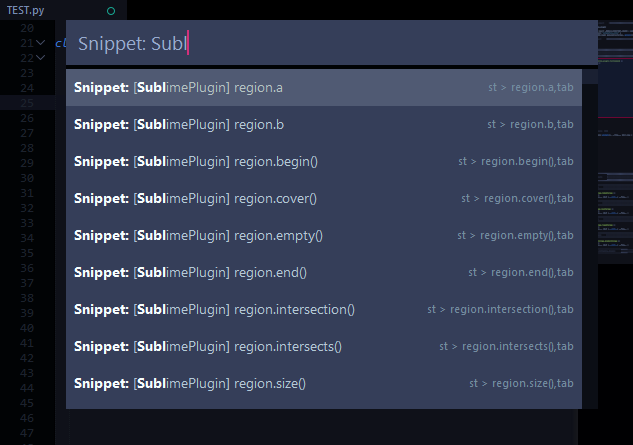 view.show_popup is currently displayed relative to the view. It would be useful to position popups in relation to the window for non-view related notifications.  ( EG: centered in the window )

For example, I have a Messenger module that displays notifications - one usage case of which is to inform users whether a toggle command has been enabled or disabled for a particular feature.

I currently position it with view.visible_region().a, but feel that notifications of this nature are more aesthetically suited to be window-centered ( much like the “Save Changes” dialog ), especially when multi-pane layouts are active. 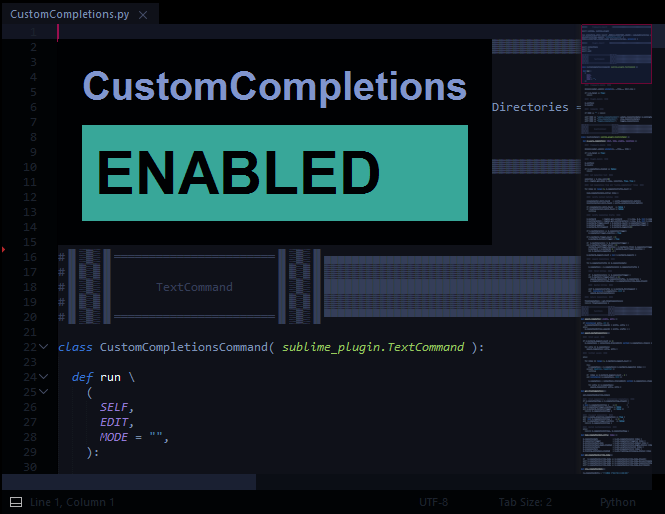 Or maybe it is opened in a view but the view not attached to any window?

Motivation: Today I can only retrieve the project folder information and have to manually recreate the list of file of the project: this is very slow, and to be propose a responsive interface in my plugin I need to cache this information (with all the issue in maintaining an up-to-date list). This was already requested some month ago here by another user.

Description: Give access to the list of indexed symbols in the project which is displayed when pressing ctrl+shift+r. Result would be a tuple, similar to the result of window().lookup_symbol_in_index()

Motivation: Today there is two API (view.symbols() and indexed_symbols) which return more or less the same list of symbol in the current view, but there is noway to have access to all the symbol in the project.