Hello! I absolutely adore Sublime Text 3. I was happy to pay for this editor and recommend it to my colleagues. Powerful package management, loads of addons, highly customizable, beautiful out of the box, insanely light weight and responsive - one thing is seriously letting me down though and that is code folding and I’ve found dozens of forum posts with similar complaints.

I struggle to understand how this implementation of code folding is useful for anybody and I suspect that many people don’t actually use it or don’t know about it. Here are my concerns with this feature: 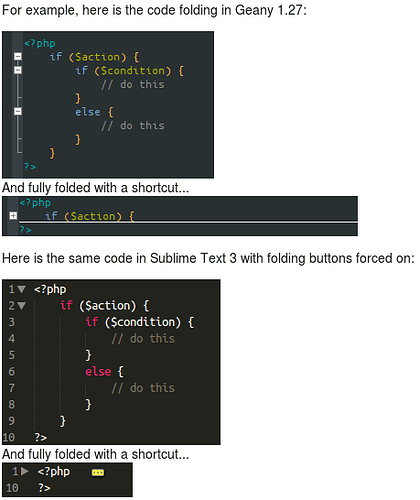 Geany has the upper hand on this one in almost every way possible:

The only feature Geany lacks is a “fold to level” shortcut like CTRL + K,3 for example. This point is moot though, as Sublime Text 3 isn’t even recognizing the nested inner if-statement in this case because it only contains a comment.

Additionally, the “Unfold All” feature does not work with this example. Folding all, and then selecting “Unfold All” from the Edit menu does absolutely nothing.

In all of my projects (C#, PHP, Laravel, Python, Bash) this is the most impacting feature issue I experience. I don’t understand why this isn’t a bigger issue. Either people aren’t actively using code-folding that much for it to be raised as a problem or I am completely missing the proper usage of code folding in Sublime.

Please have a look at beefing up the Code Folding feature for my Christmas. It would make me a very happy developer.

Edit: For completeness, here are the settings I use:

The collapse toggle buttons are hidden by default

yeah, the first thing I do is set "fade_fold_buttons": false, in my user preferences

maybe add your vote to these as you see fit:

Issue: Code Folding should be based on syntax, not on indentation level

Issue: Make Unfold behave like Fold (one level at a time)

Hi kingkeith! Yes. This is a good UI preference and should be default IMHO. I have updated my original post to include my custom settings definitions. Thanks for your feedback.

Sublime Text 3 isn’t even recognizing the nested inner if-statement in this case because it only contains a comment.

The issue here is that it’s only a single line, not that this line is a comment specifically.