This would be really cool. If they gave a discount for ST3 License holders.

Personally, I prefer when discounts don’t exist. I happily bought ST and SM licenses ($100 dark theme!) to support the developers. Since you can use both for free, if you choose to pay, it’s logically consistent to pay the full price. That’s just my train of thought; not saying that asking for discounts is wrong, just logically inconsistent.

Since you can use both for free, if you choose to pay…

I’d rather rephrase that into “Since you can TRY both products for free, without restrictions, WHEN you choose to pay…”. I’m saying this just to dispel some confusion I often encounter on forums, where I see people mentioning that ST can be used freely.

Registered users (like you and me) tend to overlook this issue, but it seems to me that many unregistered users misunderstand the license policies of ST and SM (which ultimately makes them feel they don’t really need to buy a license at all).

ST allows you to try the product for as long as you need to decide whether it suits you or not — being an editor, some people might take a week to decide, other might need three months, because they want to test all the packages they need, and/or because they might have little spare time to dedicate to trying it out. But ultimately, there comes a point when you realized whether you are going to make ST/SM your tools of choice, and at that point you need to purchase a license if you wish to carry on using the product.

In my case, it took me rather long to decide whether I wanted to switch to ST or not, because I had only a couple of hours a week to play around with it, and because I wasn’t sure it could replace the various editors I was used to work with. When SM came out, it took me only a couple of hours to decide it was going to be my Git GUI of choice, and bought a license straight away.

Personally, I hate software trial periods where you have the pressure of 30 days or 30 work sessions; and in many cases I end up not finding the time to test the software at all before the 30 days expire, due to work overload. So, there are many good products which I didn’t buy just because I burned my single chance to test them. So to me it makes sense to allow users to take all the time they need before deciding.

Somehow, this generous policy of not putting restrictions on the trial period has been often translated into the misconception that buying the license is optional, some kind of good will act to support its developers. Probably the fact that there are lots of open source packages revolving around ST and SM adds confusion to the issue and blurs the line between the proprietary (and commercial) products and their open source (and free) third party additional components.

As for the idea of a discount for ST registered users buying SM, why not? This could be a good motivation factor, especially for offices that would have to buy multiple licenses, where a 10% discount would ultimately make a difference.

I have bought licences to ST and SM, and I am very happy with that purchase. The software is excellent, and if my payment will help to make it even better it is a money well spent.

Thanks for that point of view. I’ll be buying SM

Just bought both Sublime Text and Merge license via upgrade; seems like you can “bundle and save” by getting both jointly: 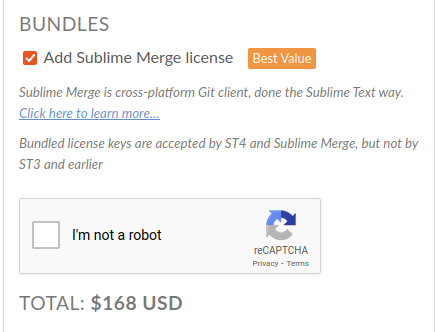