Hello,
When using the cntr-p ( the search anwhere) feature to find a file the folder name is not included in the search.

if for example I have a folder structure

and I search for docker

Is there some option which I can turn on?

Can you clarify a bit what you’re trying to do here?

As seen in the screen show below, you should indeed be able to include the folder of files in the fuzzy search term if you would like to. 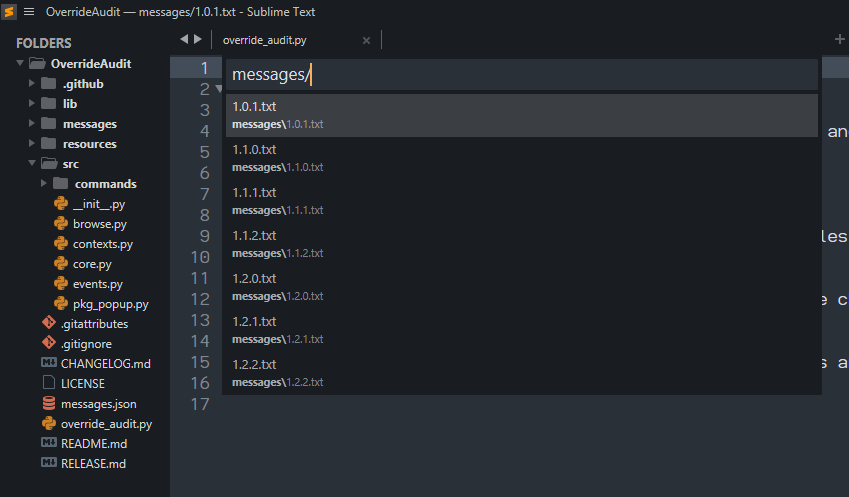 Note that everything that matches the text docker will appear in the list if you just search for that; it’s not a whole word search; perhaps that is what’s getting in your way?

You are right.
When I enable the subl --safe-mode . it works as you show and I want.

I would be very thankful if you can give some guides on what configuration I had messed with.
I looked at the Session file and there I can’t find anything suspisious.

If it works the way you expect but not in safe mode, there are two things that I would check into.

There’s a default for this setting that includes things like images, fonts, and some other binary files. If you customized that setting, you might have included a pattern that matches the files you’re trying to edit (or maybe they fall into the default, but that seems less likely).

On the other hand, if you don’t see the files in the side bar that you want to open, check the folder_exclude_patterns and file_exclude_patterns settings. These control files and folders that are masked from appearing in the sidebar if they exist, and as such they also won’t appear in the Goto overlay.

These files also have default settings, and you may have overrridden them and excluded something.

All of these settings can also be used as per-project settings in your sublime-project files as well, if you use them. So that might be a place to check as well. However those would still be respected even in safe mode, so that is less likely to be an issue in this case.