The Python syntax highlighting is pretty awesome and spot on, but it renders docstrings as strings. This may sound right by definition, but I’m finding it very distracting and would rather it render docstrings like comments.

In the code below, I’d like the docstring in “”"s to render in gray text like the comment in line 7 but without also changing the display of regular strings. I took a look at the language definitions and tried to hack it in, but quickly broke things and had to revert back. I’ll go RTFM again and allocate some time to figure this out on my own if need be, but wondering if anyone else has already done this or if I could piggyback of of someone’s awesome knowledge

This is how it renders: 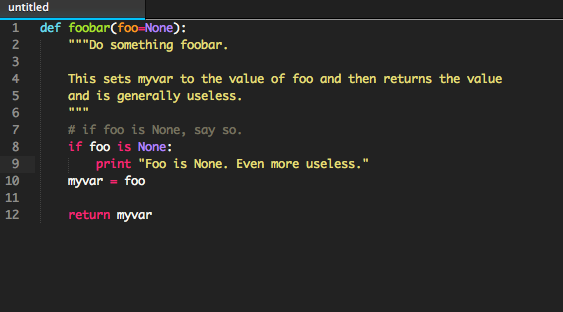 Go into your tmTheme that you are using and change the comment section to include the python string scopes.

I meant tmTheme. Corrected above.

ahhhhh… thank you @facelessuser! My sanity has returned.

facelessuser you are a saint.
The funny thing is, I’m new to python and I found it very hard to read the docstrings as I’m used to docblock comments above the function definition. But the coloring was a big part of it and I didn’t notice until now.

I wanted to add to this thread since much has changed since 2012. Docstrings are now colored like comments which is what this thread’s OP was looking for. Also, according the following post, this is aligned with how all other languages are handled:

To change how docstrings are highlighted, just add an entry to the list of rules. The following will change the docstrings to look like all other strings. Some people prefer this. You can also change the color that it uses by looking at the list of available colors in variables in the default color scheme. You may pick any of those colors to suit you. If you don’t like those colors, you can add a new color to the user color scheme variables. You would then choose a variable name that is not already used and then define a color there. That variable name would then be entered in the foreground field of your custom rule.

Note: I am using Monokai color scheme in this example, but you can use whichever one you like, the variable you use in the foreground field may then be different.

To access the default syntax definitions, open the command palette, and run “View Package File”. In the next popup, type “Python/” to view the contents of the default Python package. You will see “Python/Python-sublime-syntax” listed. Select it and you will then have the file with all the scopes that you need open in a new tab. (Updated from previous; thanks @FichteFoll)

If you want to have docstrings that are still “commenty” but also different than other comments, I add a new color called grellow to the user variables like so.

You would then change the foreground field in the rules definition to var(grellow).

This is a good summary, except for this one part:

The scope definitions needed to tie rules to the syntax are a bit buried. You need to find the directory which holds the default packages. On macOS that is located in /Applications/Sublime Text.app/Contents/MacOS/Packages . It will be in a different location on other operating systems. The package in question is named Python.sublime-package . You want to copy that file somewhere else to work on it. Don’t modify it. Just copy and mess around with the copy. It is a zip archive. Extract it and you will find a file named Python.sublime-syntax . This is where all the scopes that you need are found.

Alternatively, you can use the View Package File command and browse for Python.sublime-syntax in the following pop-up to open the syntax definition in read-only mode and use it as reference without having to locate the archive and extract it from there manually.