IMHO the regexes \d, \w, \s, so should be either constant.language or maybe support.constant.

All I see is that now I’ll will have to add an entity.name.context to work with syntax definitions

You are supposed to scope entity.name directly and match all other sub-scopenames with it. Then add special cases as overrides.

You are supposed to scope entity.name directly and match all other sub-scopenames with it. Then add special cases as overrides.

Thanks for the tip

I’m using support.class now (which works with Monokai) for \d. Since \{ and the like were already constant.character.escape, I didn’t choose that. I also didn’t choose constant.language because I figured most schemes would not have special coloring for constant.character.escape (like mine does). While I was at it, I additionally pushed a few changes after other feedback that I haven’t committed yet.

I also poked Will to add some proper selectors to the Monkai scheme so that it will highlight my variable.other scopes, which it currently does not at all. Other than that, it should work generally okay.

If I had more time I would rewrite all the other syntaxes in this package too, but unfortunately I don’t, so this will need to wait a bit more.

Been using this package for a month or so on non-trivial modes. Some thoughts thus far:

Regexes using double-quotes (") are not scoped the way that single-quoted regexes. See the Java mode for many examples

This is on purpose, kind of. Since double-quotes use backslashes for escape sequences, regular expressions start looking really ugly and would require me to almost copy the entire syntax definition, so I decided to just highlight variables and normal YAML escapes. You should almost always be using single quotes anyway, and this will “help” make the switch.

The |- operator is scoped somewhat strangely, at least in conjunction with an extended regex. See the Scala mode (base-constants context) for an example 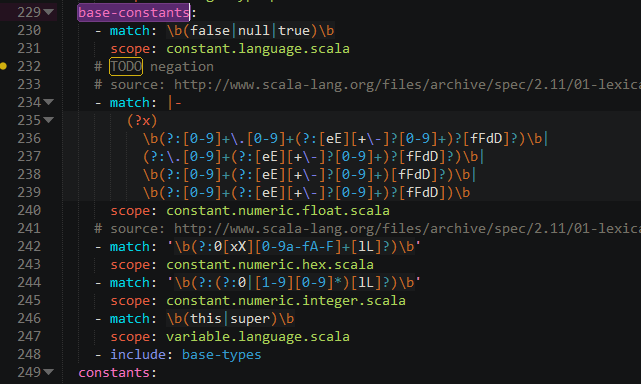 Have you considered fiddling with auto-indent a bit? It should be possible to do better than the stock YAML rules.

Can you provide an example where it doesn’t behave as expected? I haven’t had any frustrations with auto-identation.

Depends on your color scheme:

Can you provide an example where it doesn’t behave as expected? I haven’t had any frustrations with auto-identation.

No frustrations, I just think it could be even better. An example would be something like this:

Ah yes, that was indeed weird. I actually changed that long ago for the default YAML package, but forgot to push and pull request the branch. I did so last week, however, and I also made the change for the sublime-syntax syntax, but didn’t push that yet (that’s why it looks different in my shot).

No frustrations, I just think it could be even better.

Well, this is a curious case. Regarding the first comment: That should be doable. It seems more likely to add a second key-value pair to the mapping instead of a new sequence item. It would like if it ws as possible to cause ST to indent by two levels for situations where you have - match: |-, but that’s not possible without a plugin and I’d rather not add that.

The second comment might be doable as well. I’ll have to experiment with the indentation settings a bit. It will only work reliably after a single-line key-value pair however, so I’ll only add heuristics for that.

I don’t understand what the third comment is supposed to express, and would rather not add too much magic. The other comments so far were more about generic YAML.

I don’t understand what the third comment is supposed to express, and would rather not add too much magic. The other comments so far were more about generic YAML.

Thinking about what rules would be involved in the third one, there’s basically no way to do it deterministically. So… bad idea!

By the way, since this is actually an issue (or enhancement) wird the default YAML package, you should create an issue there with a reference to this thread.

I am using this package and am very happy with it overall.

The only thing that I find lacking is a lack of support for YAML tags. While these don’t have any significance to Sublime, I’m using them extensively in my build system. For example:

A python script compiles this to:

The YAML package correctly highlights !word as storage.type.tag-handle.yaml and SELECT as string.unquoted.plain.out.yaml. But this syntax doesn’t expect the tag, so it tries to interpret the entire line as a regex, producing invalid.illegal.expected-string.sublime-syntax.

My ideal behavior would be for the tag to be highlighted as it is in plain YAML and for everything else to remain the same.

Interesting usage. Yes, I can certainly add tag support for sublime-syntax highlighting; it should be trivial. I just never considered it because it’s never going to be useful if you directly edit the file to be consumed by ST.

@kingkeith has done a lot of work on new syntax definitions for sublime-snippet, tmPreferences and sublime-keymap files as well as smart completions for syntax test (

) . I’m slowly merging and integrating these into the code base, while making adjustments and restructuring the package.

Expect a new alpha release with these within the next week or two.

We’re also working on command name completions in various places (keymaps currently, but other places to follow; even .run_command in plugins). Shout-out to @r-stein.

A new pre-release is out.

Note: All syntax definitions have been moved or renamed within the Package. As a result, you will most likely notice error messages from Sublime Text reporting missing files. Just close and re-open files that this package provides syntax highlighting for.

Here’s a preview of the new sublime-keymap highlighting:

As always, please make sure to report any issues you run into: https://github.com/SublimeText/PackageDev/issues

Do they inherit from the regular JSON syntax definition? Or do they include the scopes punctuation.?

The syntax is fundamentally based on the regular JSON definition (with score names and a few includes of the generic JSON data types), but most of it is custom highlighting on top of it. You can always take a look at the underlying syntax definition.

The next alpha release will use meta.mapping.key.json string.quoted.double.json for all keys with some having an additional scope at the end, such as the main keys. This will (hopefully) also be part of the next ST dev release. See https://github.com/sublimehq/Packages/pull/862.

Finally another update, this time with lots of goodies for settings, thanks to @deathaxe.

I’ll let this video speak for itself:

On another note, this is the first beta release, though this is merely a new name. I consider the package to be generally pretty stable (also considering the few reports I get) and the only thing left for a 3.0 release is feature parity with the syntax definition rewrite.

It’s time for another big PackageDev update.
With this, we are nearing a release candidate (and stable release), since only few things are left
to do now.

This latest release brings you:

If you’re feeling curious, this release has a lot of commits which you can inspect here: https://github.com/SublimeText/PackageDev/compare/v3.0.0-beta.3...v3.0.0-beta.4. (No, I’m totally not doing this because of how much work this release was compared to the rather little visible changes.)

All the remaining features for the long-awaited 3 major release are done now and all known bugs have been fixed as well. The second release candidate should be released any minute now.

I’ll wait a couple days for more issues to arise and will pack the final release after I updated the readme, which hasn’t been touched in ages and is in desperate need of a rewrite.

Please make sure to test the package thoroughly and report any issues or bugs you encounter at the Github repo’s issues page. You may also contact me via Discord, in case you have questions or otherwise.

Congratulations on completing this package. The documentation is great, as always. Thanks for all your hard work.