I was just wondering if ST4 has resolved what to me is an issue with ST3:
i.e If a command is keybound to say ctrl+c for example, if you then had a keybinding that was ctrl+c, some_other_key_combination, ctrl+c no longer works (it does, but you have to press it twice).
More seriously if you’re using alt+somekey, if that get’s used as a double alt+somekey just doesn’t work any more (well I can’t get it to work).
I’ve got lots of user defined keybindings and someday because of this issue I’m going to have to redefine the lot. (Does it mention this in the documentation somewhere?)
Because of the default bindings, I don’t think there’s a spare key other than k.
(the ‘proof’ is that ctrl+k has large family of subsequent key presses)

Is this an issue with ST4 too ? (please let the answer be ‘No’)
It’s (key presses ST3,here) been covered in this forum before, I was hoping for a work around (there isn’t; other than amazing keybinding planning or ctrl+k,ctrl+other_key,ctrl+another_key), but does ST4 handle key presses in the same way ?

Thanks to anyone who’s used ST4 and can tell me !

Yes, key bindings have been improved.

Your example with ctr+c works fine with ST4094. 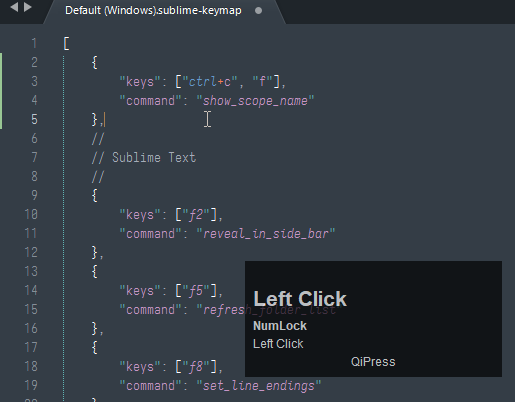 Conflicts with regards to showing/hiding main menu via alt key and keybindings containing that key have been resolved as well.

Also mnemoics are no longer triggered in case the key combination is bound to a command, so menu items don’t show up by accident anymore.

Sorry for my ignorance, but what is ST4 and where do I get it? I completely missed any sort of announcement.

We’re running a beta on the Sublime discord server.