the horizontal scroll bar only pans the lowest chunk on the display right and left, it should pan every visible code chunk so I dont need to lose visual context on one chunk just to pan through another.

Thanks for your feedback!

Neither of these options should result in you changing your vertical scroll position.

Let me know if this doesn’t work for you!

When you hover over the bottom of the hunk, a scroll bar should appear like so (if the contents of the diff doesn’t fit in the screen). 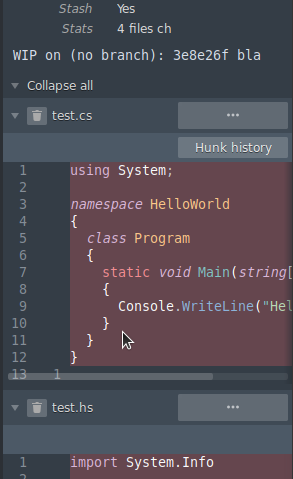 Are you sure the contents of the file does not fit on the screen, and word wrapping is not enabled?

I am also having this same problem. I cannot get horizontal scrollbars to appear for the life of me.

I’m using Ubuntu 20.04, Sublime Merge stable channel 2074. I have the Cinnamon desktop installed, but I also tried it with the vanilla (No pun intended!) desktop “Ubuntu” and the problem is still there.

I switched back to the 2068 version and the scrollbars work as expected in that version.

If I set the scrollbars to “Use overlay scroll bars” in Themes settings, it makes no difference.

I can get a horizontal scrollbar if I click in the chunk and then “arrow” off to the right with the keyboard.

If you use Preferences > Edit Settings the settings file will open up; you add the setting there:

If you don’t want the scrollbars to ever overlay, set the setting to "disabled"; using "enabled" forces it to be turned on no matter what, and "system" follows the overall OS preference for that.

I can get back to the 2068 behavior by using “disabled”. That works for me.