Help me with this problem 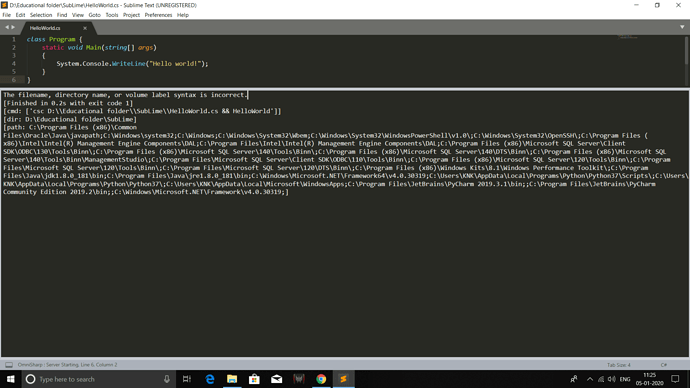 Have you tried googling the error to see what it might mean. Here is a link which I found if I perform a google search for error that the build system is displaying. I don’t think this is a Sublime specific problem though. Hope it helps

The C# compiler (csc.exe) is provided with the .NET 4.8 installation. You need to figure out the correct version and add the folder to the %PATH% as follows.

This is purely a guess since you’ve provided no extra information at all, including the sublime-build file that’s not working for you, but I would say that @UltraInstinct05 is correct here.

Based on observable results, your build system probably includes the line:

Using cmd directly executes the first item msc with the second item as an argument; you’re telling the compiler to literally try to compile a file that has && in it’s name, and that’s not valid.

If this is in fact the case, I would try replacing that line with:

Generally speaking, trying to use cmd (executing the command directly) while also using shell directives (&& to execute a second command) isn’t going to work because msc is not the shell and doesn’t know that && is supposed to be special.