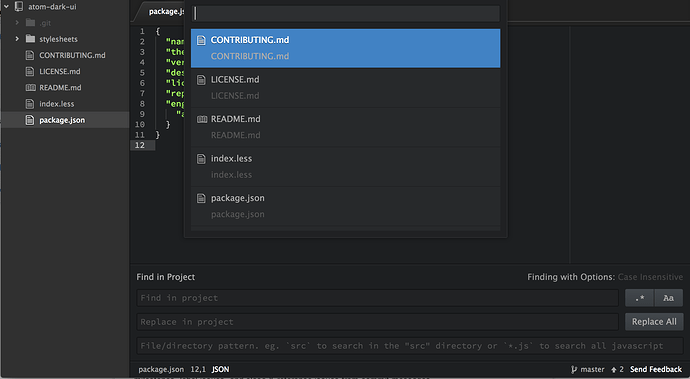 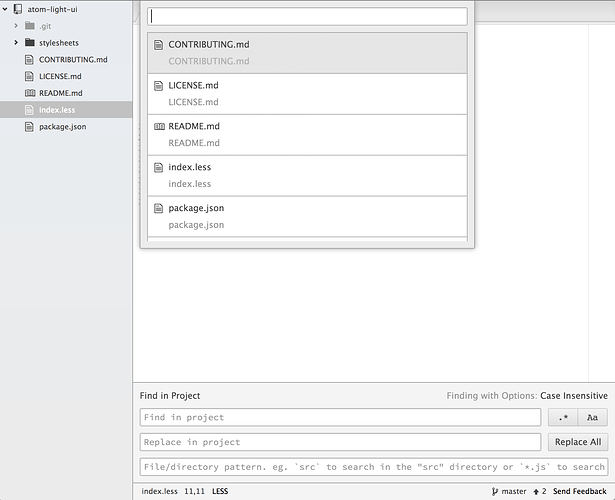 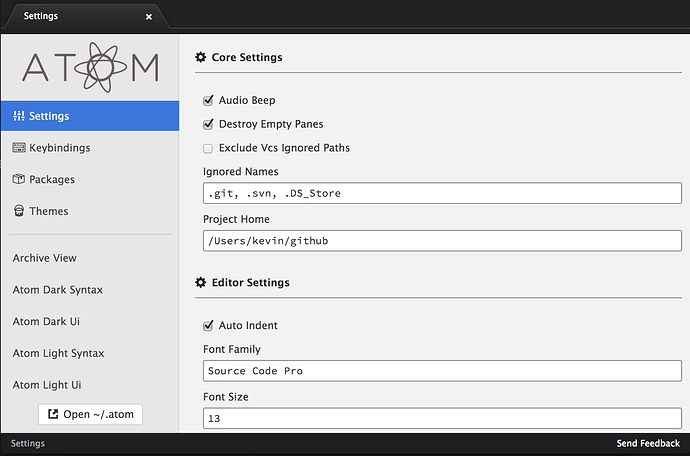 People are speculating that GitHub has bought SublimeText, but I’m not feeling that at all from this.

It does look very similar. They also use some identical terms - Command Palette for example. Honestly, this can only be good for us.

More competition is only a good thing. Sublime currently has the ecosystem advantage, but Atom will catch up with that quickly. Sublime also has a speed advantage, and this could be its selling point for a longer time.

This does look interesting. Though I doubt it will force Jon to open source, competition is always good. The only thing I am not excited about is plugins via coffeescript, but if I get to the point of switching, I can deal with with coffeescript.

the technology core is different though. says it uses node.js

And you can now signup for it.

It seems really nice. A lot of shortcuts remain the same, although they have counterparts too. Plugin system seems very cool, allows you to do a lot with it, I’m going to port some of mine across during the weekend.

They compare it to Sublime in their initial blog post (blog.atom.io/2014/02/26/introducing-atom.html), doubt GitHub bought Sublime. Looks nearly identical tho.

I just received an invite to Atom, it looks like a promising editor. But I am planning to stick with Sublime Text - at least at this point - (also hoping to see some sort of updates to put all this talk of it “being dead” to bed). Jon’s the man, I will happily support him with my money (already own my own license and have converted numerous others) and if he wants help ever, that too.

out of jokes, I’ll switch the day they buy the amazing editor component to Jon : P

This invite is taking forever to arrive… anyone have one that they can spare?

If I get another one, I will shoot it your way if you don’t get one before I get an extra. A kind soul just hooked me up.

Haven’t had a chance to play with it yet. All I’ve done so far is opened it up and poked around a bit. Couldn’t find out how to turn off the line ruler…, had it crash once, but it does look neat. I am concerned a bit about performance being javascript based. I’ll have to run some huge files through it and such. Performance of the plugin layer will be interesting to test too. I think trying to develop something small on it is going to really give me the impression I need.

Looks nice, and it has uses for us hardcore sublime-ers. I’d have more respect for it though if they paid a little homage to the inspiration. Looks like they’ve ripped pretty much everything from ST - UI, features, keybindings, config - but there’s no reference to ST at all except “Sublime and TextMate offer convenience but only limited extensibility” on the blogpage.

Or maybe we missed the bleeding obvious: perhaps Jon’s the lead developer of Atom

I think Atom is going to be big for the Web Developers on Sublime. Being able to render webpages inside it etc. is really going to be nice for them. For others it will be interesting to see. It really does feel like an ST clone with git integration.

I am a bit surprised that Sublime isn’t mentioned more as well. Giving at least a shout out feels like the right thing to do. They borrowed the style, the command palette, go to anything, pretty much everything except the underlying architecture.

I am going to miss the python plugin layer in it as well. Python is such a fun language to code in. Though I know plenty of javascript, and I understand why javascript makes the best choice for a node.js editor, it is not nearly as enjoyable to code in JS.

CoffeeScript is rather pleasant man

and you’ll have a consistent deployment target, which means you’ll be able to use properties and what not, which most people avoid in the browser.

CoffeeScript is rather pleasant man

. Javascript is the language of browsers. So, yeah if I am using a browser, CoffeeScript is a much better option. Javascript out of the box is awkward for classes and such, so anything that improves Javascript is welcome. No offense to Web Developers, you need to love what you do, and you have to do Javascript. But if I can pick any language, it would not be my first choice.

Looking at the packages code and documentations (all I can do right now as I’m a Windows user), I’ve great expectation from this new editor.
It borrowed most of the great features of ST and it look like plugins could do almost anything, way more powerful than ST (which is already great).
Some might say they stolen ST ideas, which is probably somewhat true.

In addition Atom have done what jps should have done long time ago: put all packages to Github and let the community improve them.
Have you see the number of Pull Requests already pushed ? In a few days and on a MAC only platform, it’s quite impressive.

I think Sublime could still compete if some basic things change for Sublime. Sublime still has time.

Atom appears it won’t be free when it is complete, so you will have to pay for it just like Sublime.

Atom still lacks quite a bit of functionality that needs to be built up as official packages. Sublime is always going to have an advantage with speed due to using native code (I am interested to test how much of advantage, haven’t had a chance to really test extensively). Atom really needs a better built-in package manager (browsing and installing needs to be better). Needs to be able to manage projects…seriously, how is that not already in there.

With that said, Atom is extremely modular. Everything is a module which allows for ridiculous customization which lends itself to even cooler plugins since you can design web interfaces into a tab for a plugin, probably create your own overlays etc. Probably allows for people to mess things up with their plugins more too, but I guess there is always a price to pay for high customization. For web developers, I feel an editor that is a web browser is going to have some serious advantages over sublime.

But the big advantage of Atom is going to be support. If Atom in the end is so close to Sublime functionality, enough that people can easily switch, and the price is comparable, and the speed close enough, the added benefit of support in Atom will probably be the nail in Sublime’s coffin.

If sublime would spend serious effort on the current bugs, and iron out some things to be more consistent in the API and such, I think Sublime could still be a contender in the future. I think if Sublime added better access to render interfaces for plugins, that would make it a very good contender. I don’t think it necessarily has to expose everything like Atom does. I used to love customizing the heck out of Linux OSs, but these days, I find it exhausting. I don’t need to customize everything, just the things that matter. I’m also not a web developer, so I don’t really need the web advantages that Atom potentially can offer. And because I’m not a web developer I don’t really know how big of an advantage Atom actually has as an editor.

Atom is not ready for enough for me to jump ship; maybe down the road. I would be interested to hear Jon’s take on Atom…

Atom is not ready for enough for me to jump ship; maybe down the road. I would be interested to hear Jon’s take on Atom…

I’ll use exactly the same phrase i used on E-text back in the day: I think Jon is using Atom and he doesn’t care about Sublime anymore